The city of Pittsburgh is lucky to have three major pro sports teams, plus several nearby universities with outstanding athletic programs. Picking the city's most popular athletes was difficult. How should we compare athletes from different sports, particularly since the Steelers and Penguins are so clearly the most popular teams in town? Should we pick outstanding college athletes, like Pitt's Dion Lewis, even though college players tend to come and go so quickly? (Ultimately, we stuck with the pros. Four of those were obvious anyway, and I think a reasonable case can be made for the fifth, who is the only Pirate on this list.) Without further ado, and in alphabetical order...

Due to the cancellation of the 2004-05 NHL season, a lottery was held to determine which team would get the first overall selection in the 2005 NHL Draft. The final two clubs were the Pittsburgh Penguins and the team formerly known as the Anaheim Mighty Ducks. The Pens got lucky, won the draw and took Sidney Crosby.  It's hard to imagine Crosby playing for another NHL team, but that's how close it was.

Since then, Sid has left an indelible mark, much like a brand (or a new arena), on Pittsburgh sports. Crosby isn't special just because of his incredible ability but also his unparalleled work ethic and desire to become a complete player.

Having often been criticized for his lack of goal-scoring ability, Crosby came out firing in 2009-10 and finished tied for the league lead in goals with 51, besting his previous high by 15. From woefully below average on faceoffs and in shootouts to near automatic on both fronts, where there once were holes in his game, there are now strengths.

And so, as a rookie, when Crosby became the youngest captain in NHL history, it seemed a little forced. Now? It's hard to imagine anyone else in the role... just as it would be hard to imagine Crosby in Anaheim. Lady Luck works in mysterious ways, and so Crosby's legend will be written in black and gold. Sit back and enjoy the next chapter.

With the second overall pick in the 2004 NHL Entry Draft, the Pittsburgh Penguins drafted Russian winger Evgeni Malkin... and two years later, after international transfer denials, legal maneuvering and a nightmare-inducing collision with with John LeClair, Malkin finally made his NHL debut.

The wait was long, but oh, was it worth it. Riding a three game scoring streak through his first three games, Malkin met the New Jersey Devils for the second time (he had scored his first goal against the Devils six nights before) in his short career on October 24th, 2006. With the Pens holding a 3-2 lead, the rookie took a tape-to-tape lead pass from Sidney Crosby at the Devils' blue line. From there, Malkin danced inside Brad Lukowich, fended off a backside mugging from Colin White and left Martin Brodeur wondering what went wrong as he reached around the winningest goaltender in NHL history and slipped the puck past him on his backhand. Hello, Mr. Malkin.

Since then, the man endearingly referred to as 'Geno' has collected an impressive list of accolades in his short career, with NHL and and Penguins Rookie of the Year honors, an NHL scoring title and a playoffs MVP award to go along with a Stanley Cup and an Olympic Silver Medal.

But those are just awards. What makes Malkin special isn't in the hardware, it's on the ice on a nightly basis. The extra streak of daring that compels him to cut inside on Lukowich, the strength to fend off a brute like White and the natural ability to do it all while beating Brodeur -- it's all part of the package that makes Malkin a once-in-a-lifetime talent.

You can chuckle if you want at the fact that McCutchen is the Bucs' most popular player (that's like being the world's tallest midget, amirite?), but look: the Pirates play 162 games a year, and McCutchen is like a giant bottle of Rolaids. That might not mean much to you if you don't suffer the heartburn that Pirates fans do day after day, but among the faithful, McCutchen's popularity is just about unassailable.

McCutchen is the complete package -- he hits for average, his power is coming along nicely, he controls the strike zone well, and he has the tools to be an outstanding defensive center fielder. He's also cool as a cucumber, and everything he does feels competent, even masterful -- he rarely makes mistakes, and it always looks like the incredibly difficult stuff he does is, for him, part of just another day at the office. Given all the disorganization that surrounds him as a Pirate, this is no small thing: like Jason Bay and Brian Giles before him, McCutchen is truly a breath of fresh air.

McCutchen is also amazing to watch on a purely visceral level: his power is already remarkable for a player of his age and size, his bat speed is excellent, and the way he gets around the bases, particularly from first to third, is a sight to behold. 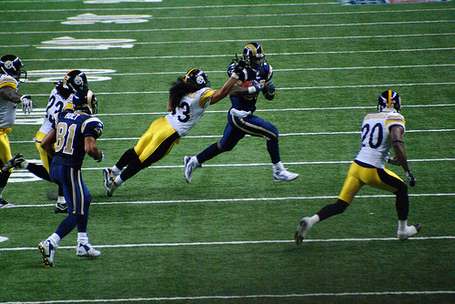 Is there anything Troy Polamalu can't do on a football field? He's made several absolutely ridiculous interceptions the past two seasons (remember him laying out and scooping up the ball with his fingertips against the Chargers? Or his one-handed snag last year against the Titans?), he is as sure a tackler as there is in the game, and as we saw last year, his presence seems to make everybody around him just a bit better. Football is the ultimate team game - no single player should make or break a team's chances, particularly on defense. But let's face it, if the Steelers hope to make a run at Lombardi Trophy No. 7, they'll need a healthy Troy Polamalu in their secondary for most, if not all of the season.

Oh yeah, I almost forgot. There's another great thing about Polamalu. The female citizens of Steeler Nation love him. He's hands down the most popular player amongst women and girls. And with them interested in the Steelers and the game, it's that much easier and enjoyable to get consumed by Steelers football every fall and winter. 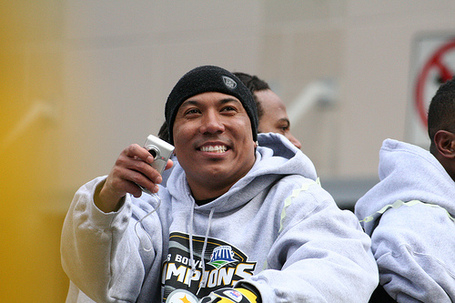 There's no doubt in my (completely biased) mind that Steelers wide receiver Hines Ward is Canton-bound. True, he only has one season of truly eye-popping numbers (with 112 receptions, 1,329 yards and 12 scores in 2002), but his consistent production over the last decade and his unique style of play have earned him a place in the Hall.

At worst, they've certainly earned him a special place in the hearts of Steelers fans everywhere. Despite lacking size, elite speed and a first-round pedigree, Ward can do it all. He lines up all over the field -- flanker, split end, even the slot -- and catches everything thrown his way. He's courageous over the middle of the field and is adept at finding soft spots in zone coverage and maintaining possession despite big hits -- he'll do anything to keep the chains moving. Ward is also brilliant after the catch, even when he's missing a shoe. He annihilates safeties and linebackers downfield, springing teammates free for extra yardage. And of course there's the trademark grin -- Ward smiles ear-to-ear after just about every play, even if he's the one getting his bell rung. It's clear that Ward simply loves football, and for Steelers fans, that kind of joy is infectious.

It will break my heart when Ward, at the geriatric football age of 34, begins to lose his edge -- whenever that is. But for now, Pittsburgh can sit back and enjoy watching not only one of the city's favorite athletes of today, but one of their best, ever.