SB Nation's New York Ranger blog, Blueshirt Banter, had a very interesting look at young defensemen who've recently played in the NHL all across the league. Kris Letang's data was analyzed - three seasons worth, in fact.

After the jump, let's look at the actual growth charted out of Letang, and then take a look at his latest happenings off the ice.

The x-axis (that's left to right if you've been out of school too long) shows Corsi rating. The Corsi Rating is an advanced stat that measures a player's value in terms of the difference in shots between teams.  For instance, a player will have a +10 Corsi rating if he's on the ice for 15 shot attempts by his team and five shot attempts from the opponents. In the most basic of terms; the further a player is to the right, the better he has done, as he's on the ice playing while his team is shooting the puck, instead of stuck playing defense and watching the other team shoot more.

The y-axis (up and down) graphs the players based on their "quality of competition" number. This is calculated by the time spent playing stronger or weaker players. So matching up against a team's top scoring line night after night will earn a player a strong QoC number, while a player getting easier minutes against less skilled players will be located towards the bottom. 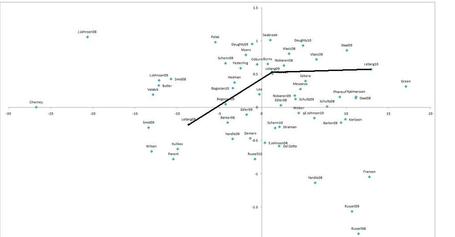 Letang has moved in the right direction, according to Corsi and QoC figures, and compares very favorably to his young defenseman peers. Only Norris Trophy finalist Mike Green has had a better Corsi season than Letang did in 2010. As the line I drew (hopefully) illustrates, Letang made the jump from negative Corsi and weak QoC from his rookie season to much better results while facing stronger opponents.

Now that all of that heavy lifting and statistical analysis is out of the way, here's your summer fun. There are no graphs or charts, but there is Kris Letang at apparently some sort of fashion show with definitely a ridiculous hair-style going on.  You're welcome, world.