Pegula, a billionaire by way of Royal Dutch Shell buying out his company for $4.7 billion, was initially rumored to be the leading donor in the plans and according to an anonymous source close to Onward State, this still looks to be the case.  Apparently, the donation is very close to being signed, sealed and delivered.

The sum would be a sizeable one, if not the largest in that of the university’s history. The new arena, which would hopefully seat 6,000-8,000 people would cost around $80 million to build. The placement of the arena still seems to be a sticking point, with speculation dividing itself between near Medlar Field and behind Shields Building.

For those of you unfamiliar with the Penn State campus, see the map after the jump. 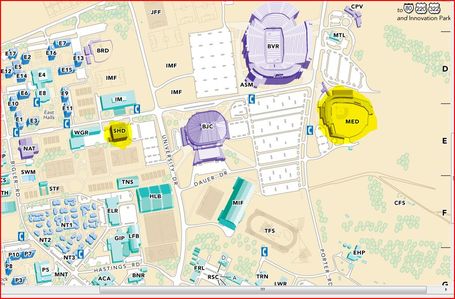 The area behind Shields is home to several practice fields, Astroturf Field (where the field hockey team plays) and the Indoor Tennis Center. There's not really much out by Medlar except parking.

Shields is probably the more desirable location given its proximity to the high student population at East Halls literally across the street, but practically, Medlar makes more sense because there's really nothing to displace/rebuild. A move behind Shields would likely spell doom to something behind it, if not everything. The university would have to move that stuff somewhere else, something I'm sure officials would prefer not to do.