A look back at the Pirates doubleheader in Washington during the Fourth of July weekend.

Back in 2006, I took my first trip to see the Washington Nationals play in D.C. at Robert F. Kennedy Stadium, the team's home in its first three years of existence. I was excited, since RFK was, at the time, one of the last "cookie-cutter" stadiums, like old Three Rivers Stadium, remaining in the game. I was looking forward to taking a trip back into a different era of baseball.

Once I was inside, though, I was quickly reminded why teams have pushed so hard to build new stadiums. Day-old trash was lying around my outfield seats. The chairs themselves were wooden and had peeling paint. Worst of all, the concession workers cost my dad and brother three innings by doing their jobs unbelievably slowly.

So, as I traveled to D.C. once again to see the Nats take on the Pirates in a doubleheader, I was hoping to put those memories behind me at brand-new Nationals Park. Mission accomplished.

Parking/Access: My friends and I didn't park at the stadium. We instead took the Metro in from Foggy Bottom, home of George Washington University, and we got to and from the game quickly that way. We saw signs for $40 parking and almost vomited, but thankfully, those sky-high prices are easily avoided by taking public transportation. Wherever you're coming from, the Metro is about as good an option as you'll find around baseball for getting to and from a game quickly and painlessly. Grade: B (for the parking prices)

Tickets: Doubleheaders almost always create a ticketing mess, and this past weekend was no different in Washington. When we got to the window, the only tickets available without spending big bucks were $10 for standing room only. Fortunately, few were actually able to stay for both games, so we found seats for both ends of the twin bill rather easily. In general, though, it looked like the ticket prices were fair, and some people we talked to got into the game for as little as $2. That's a deal if you're watching Little League, let alone two Major League Baseball games. The ticket lines probably could have been more efficient, but that's about my only complaint. Grade: B+

Food: As usual, the food at Nationals Park was out of my college-aged price range, but unlike at some of the other stadiums I've been to this year, I was actually compelled to buy something looking at what other folks were carrying around. There was an "endless popcorn" option for $7, which, if you've been to the movies lately, looked like a solid deal. There were delicious looking chili dogs with all kinds of toppings available, too. One of my friends grabbed an Italian hoagie, chips and a drink for $14. That's a little pricey for my tastes, but it's a food option not available at most parks. Overall, I was impressed with what I saw. If you have money to blow on overpriced food, Nationals Park looks to be a place where it can be almost worth it. Grade: A-

Ballpark Staff: As I said above, the ticket windows were a little pokey, which caused us to miss part of the first inning despite arriving about a half-hour early. In fairness, though, between the doubleheader and the fact that Nationals-Pirates is a better draw than most had expected it to be early in the season, that's understandable, so we won't hold too much of that against them. Inside the park, the staff was helpful. They also didn't make us feel like we were committing a crime by sitting in empty upper deck seats with our standing-room tickets as they do at PNC Park. Overall, it was a pleasant experience. Grade: B

Views: We sat in two different places in the upper deck for each game of the double-dip, and both locations offered solid views. One was on the third-base line and one was behind the plate. I'd sit in both again in an instant. We also looked around a little, and found the blue left field seats look pretty cool. If I ever go back, I'll probably try to sit there. Grade: A

Overall: The building is beautiful and the staff is great, but when I look back on the trip to Nationals Park, I still feel like there was something missing. The place just didn't quite have the charm of a PNC Park, Progressive Field or Great American Ball Park. The stadium is parked away from the center of town among office buildings and old Navy Yard facilities. It just doesn't feel like you're at a baseball game until you're in your seats. Hopefully, as the team establishes itself in the neighborhood a little more, that will change. For now, though, Nationals Park is missing that last little bit of uniqueness that will take it from being a good ballpark to a great ballpark. Grade: B+ 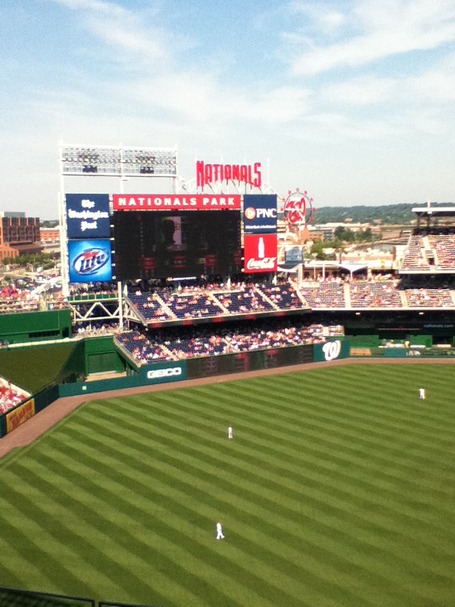 View of the outfield from our seats for game one of the doubleheader. 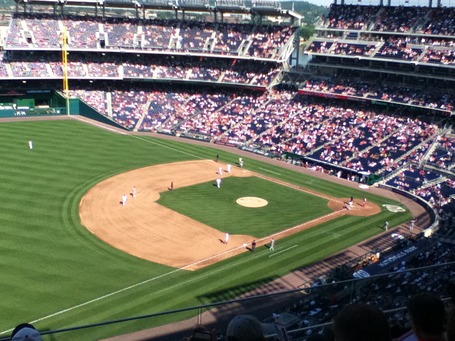 View of the infield. 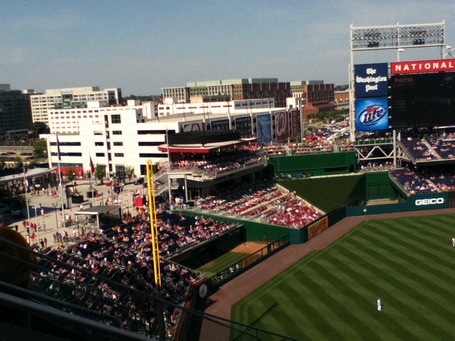 A look at the left field seating. 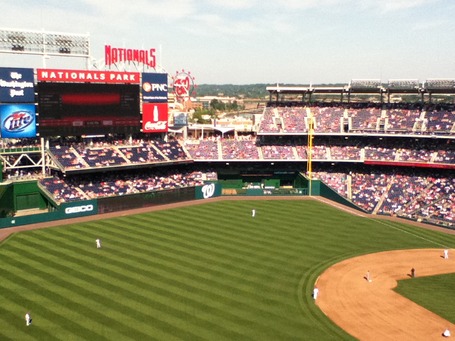 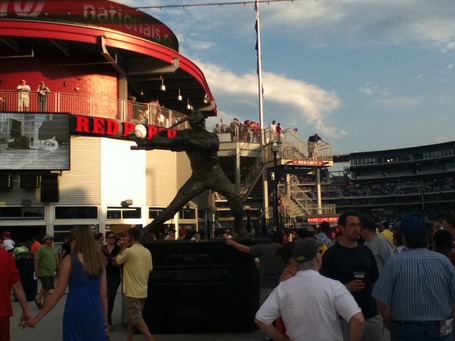 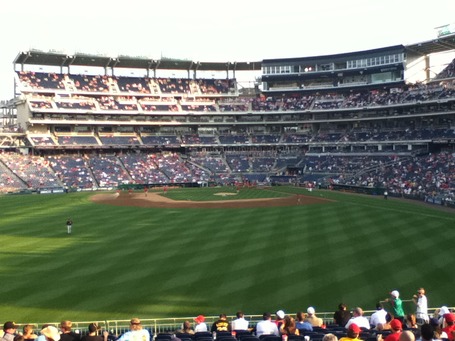 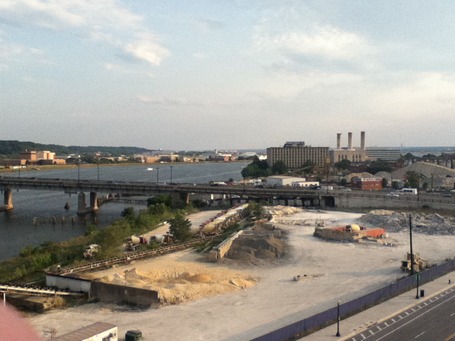 View of the Potomac River from the top deck of Nationals Park. 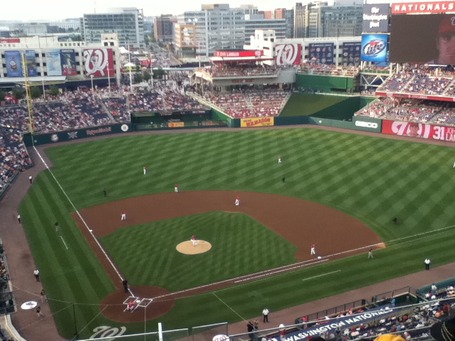 Our view for game two of the doubleheader. 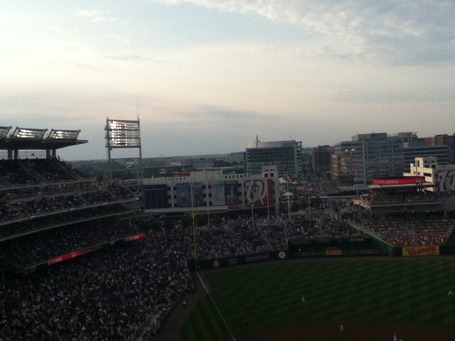 Can you find the U.S. Capitol dome? 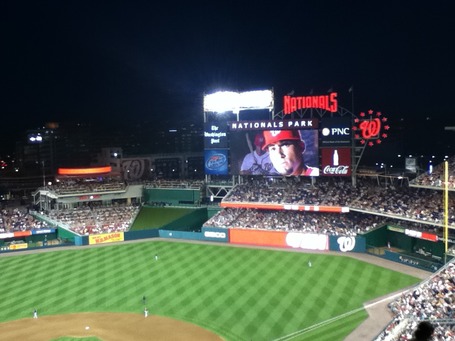 View of the outfield at night. 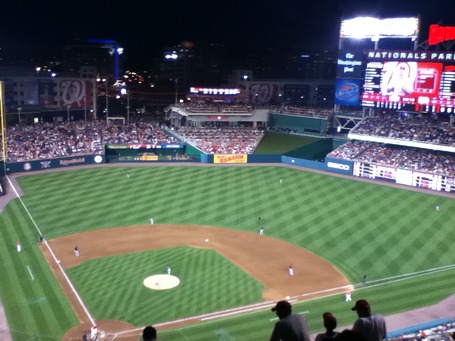 View of the infield at night.

For more on the Washington Nationals, check out Federal Baseball.