Redskins vs. Steelers: Many players, fans unenthusiastic about 'bumblebee' uniforms

Share All sharing options for: Redskins vs. Steelers: Many players, fans unenthusiastic about 'bumblebee' uniforms

Amid the exciting storylines leading up to Sunday's Redskins-Steelers showdown, fans are divided on Pittsburgh's uniform selection. In honor of the team's 80th season, the Steelers will come out stinging in what Ike Taylor has called their "bumblebee" look. 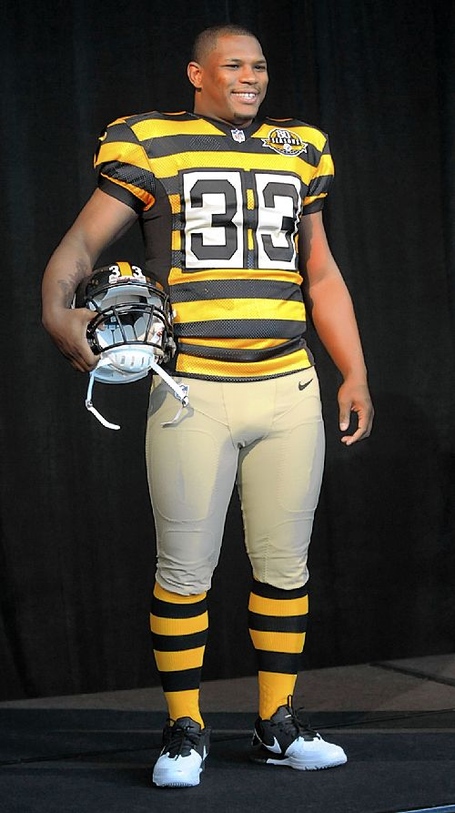 via John Heller from the Pittsburgh Post-Gazette

That's running back Isaac Redman modeling the jerseys back in April. Ike Taylor is clearly excited to show these uniforms off. He's so excited, in fact, that existing words don't do his emotions justice: "I'll try to put 'swag' and 'swurve' in the same word. How about 'swavvin'? You got to have that Looney Toons accent like Porky the Pig when you say it, too. 'Swav-v-v-v-v-v-v-in.' "

The uniforms are available for purchase online or at Heinz Field for $99.95. If you like this look (a Pittsburgh Post-Gazette poll found that 14 percent of respondents do) then you'll be happy to know that the Steelers plan on donning the retro jerseys again on Nov. 18 against the Ravens.