At first it appeared as if Brown's gait was thrown off by losing his shoe, however while walking a long the sideline it became apparent that the Steelers' leading receiver was in pain, and struggling with his foot. 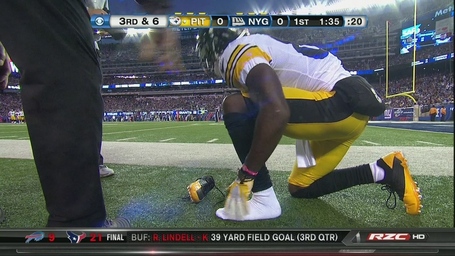 Antonio Brown's feet became tangled with the defenders on the deep route. Moments ago the Steelers listed Brown as 'questionable' to return, due to an ankle injury. Pittsburgh have turned to Jerricho Cotchery in Brown's absence. The wide receiver, picked up in the off-season has just four receptions for 42 yards on the season.

Thus far it doesn't look like Antonio Brown being on the sideline is having a huge effect on the Steelers offense. Emmanuel Sanders caught a touchdown pass moments ago, showing a perfect toe tap to keep his feet in-bounds, and ensure the score.

This story originally appeared on SBNation.com.