The New England Patriots started with the football in the fourth quarter as they were in the middle of a drive from the third quarter. Two plays in, however, New England turned the football over as Tom Brady attempted to hit Rob Gronkowski deep down the field and it was picked off by New York Giants linebacker Chase Blackburn at the eight yard line.

After the interception the Giants began moving down the football field by picking up little chunks of yardage and converting on third downs. The Giants got just past midfield but then began to have a few mental lapses. The Giants were forced to burn two timeouts on the drive to avoid delay of game penalties, leaving themselves with just one timeout to go with just under ten minutes left in the game. The Giants wound up punting on the drive, leaving head coach Tom Coughlin clearly upset with the ending sequence. 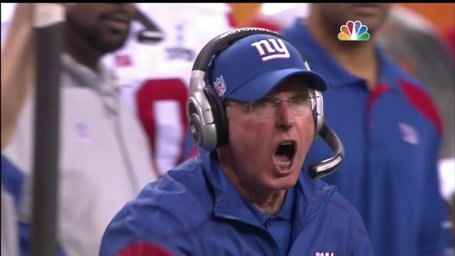 After the punt the Patriots looked like they were going to work themselves down the field again, but on second down Tom Brady led Wes Welker just a little too much as Welker couldn't haul in the leaping twisting catch. Brady missed on the very next pass forcing the Patriots to punt the ball back to the Giants. Eli Manning wasted no time on getting the Giants down the field as he hit Mario Manningham on a deep pass down the sideline.

The Patriots got the football back with under a minute left and were able to convert a 4th-and-16 for the first down and got down near midfield before spiking the football. The Patriots had a few more shots, but they just couldn't get enough yardage to get in range for anything but hail marys as the game clock expired.