The New York Giants won Super Bowl XLVI, in large part thanks to the play of quarterback Eli Manning. It was a hard fought and close game, once again coming down to the wire just like the previous match up between the two teams a few years ago. Oddly enough, the game ended in nearly the same fashion with the Giants driving down the football field near the end of the game for the game winning score and the feet of Ahamad Bradshaw. The game winning drive however was orchestrated by some great passes by Manning, including a 38-yard completion down the sideline to start the final drive.

Manning ended the day completing 30 of his 40 pass attempts for 296 yards and one touchdown. All evening, Manning completed passes on third down to keep drives alive and didn't really make very many mistakes or put his team in poor positions. Manning wins his second Super Bowl MVP award, his first also coming against the New England Patriots in Super Bowl XLII 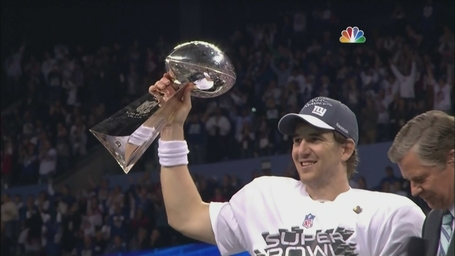