Oh my. Via Kevin Horne, a Penn State-area bookstore (apparently not the school's official bookstore, mind you, but a bookstore near Penn State) is selling Penn State shirts comparing the NCAA to the USSR. The blue-and-white shirts have "NCAA" on the front, with a Soviet hammer and sickle in place of the C. Below, it says "National Communist Athletic Association."

The shirts evidently come from Smack Apparel, and the back reads, "Overstepping Their Bounds And Punishing The Innocent Since 1906." Um, okay. Anyway, check out the shirt after the jump. 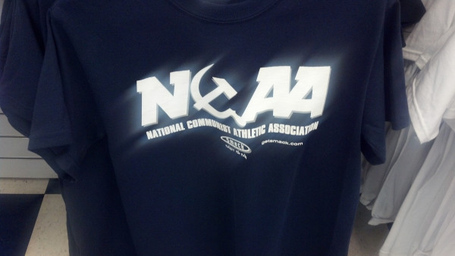