While Pitt and Penn State struggle, West Virginia is the best team in the region. However, the Big Ten as a conference is at or near the top of the conference power rankings.

The first BCS poll of the 2010 college football season was unveiled on Sunday night, and to no one's surprise, controversy surrounds the poll. When there are three teams that play in non-automatic qualifying conferences in the top ten of the poll, there is bound to be debate.

How did West Virginia, Pitt, and Penn State fare in each portion of the BCS? And how strong are the Big East and Big Ten? Let's take a look.

Not surprisingly, neither Penn State nor Pitt are ranked in any of the polls. Each team is reeling from surprising early-season losses, and each team sits at 3-3 overall (Pitt is 1-0 in the Big East, while Penn State is 0-2 in the Big Ten).

West Virginia, with only one loss (to No. 6 LSU, no less), is the lone team in the region with anything to brag about. It sits atop the Big East standings.

As far as conferences go, the Big East is really struggling to keep up with the rest. They are at a slight disadvantage with only eight teams, but only West Virginia placed in any of the polls, including the "Receiving Votes" category. The Big Ten, on the other hand, has four teams in the Top 15 of the BCS and has seven teams receiving votes in the Harris Poll (six in the USA Today poll). Looking solely at the BCS rankings, the Big Ten averages the second-highest ranking. 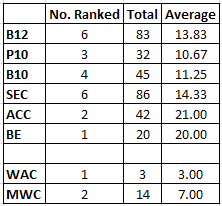 Local Teams
1. West Virginia - Have looked the best so far and control their own BCS bowl destiny; Backyard Brawl shaping up to be very important, once again

2a. Penn State - Losses to No. 8 and No. 15 in BCS standings (and Illinois); the raw talent is there, and it's just a matter of time before it comes together

2b. Pitt - Loss to No. 9 in BCS standings (and fringe Top 25 Miami and Notre Dame); like PSU, the coaching staff is scrambling to find answers