Pitt and Penn State won their games easily while WVU dropped a heartbreaker to Syracuse. How will that affect their respective poll positions, and which conference is the strongest?

What a crazy year of college football. Florida, Texas and Notre Dame are unranked. USC is ranked 24 in the AP, but is not allowed to be in the BCS standings. One team from each of the Mountain West and Western Athletic Conferences are in the top four of the BCS, while no ACC team appears until No. 16. And Syracuse (SYRACUSE!) is the second highest vote-getter in a conference that is entirely unrepresented in the BCS.

All three local teams were in action at noon on Saturday, and all three were looking for wins to help their bowl chances. Pitt had the easiest time with its opponent, handing Rutgers a 41-21 defeat and reemerging as a conference crown contender. Penn State, in dire need of a victory following two straight losses, took care of Minnesota 33-21. The offense finally came alive, but QB Robert Bolden was knocked out of the game. Finally, West Virginia did not stay in the BCS picture very long, falling 19-14 to a Syracuse team that was blown out by Pitt the week before. Both the Nittany Lions and Panthers covered their spreads, while the Mountaineers, a 14-point favorite, fell short.

What does all of this mean for the polls? And has there been any shakeup in the power rankings? Let's take a look.

With the West Virginia loss, the region is now unrepresented in the BCS, as is the Big East Conference. Pitt received a few votes in the Harris Poll, and West Virginia still received votes in both human polls, but no local team is any any Top 25.

Following their victories, Penn State (+7.25 spots) and Pitt (+16) improved their computer averages, while WVU's loss dropped theirs (-15.5). West Virginia still has a slight lead in the rankings, as both Pitt and Penn State have three losses to WVU's two. All signs point to a Backyard Brawl with major implications.

As mentioned, the Big East is now without a BCS representative. Some in the media are suggesting the conference might have an unranked BCS representative by the team the season is over. The Big Ten has four teams ranked in the BCS, including No. 5 Michigan State, a team many pegged as middle of the road in preseason analyses. 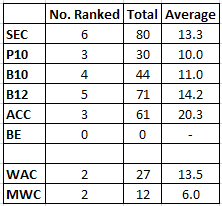 Local Teams
1a. West Virginia - still ahead even with a conference loss to an underrated Syracuse team

1b. Pitt - all three losses out of conference, though Notre Dame is plain awful

2. Penn State - back on track after taking care of Big Ten doormat Minnesota, but possibly lost a QB