BCS Rankings: Penn State Pulls Ahead Of Other Local Teams

With a dominating performance over Michigan, Penn State is now the local team to beat. Pitt took care of Louisville with a strong second half, while West Virginia lost its second in a row to UConn.

Share All sharing options for: BCS Rankings: Penn State Pulls Ahead Of Other Local Teams

What a terrible time to be the number one ranked team in college football. Beginning with Alabama's loss to South Carolina, the team that has been ranked at the top each week (of the USA Today/Coaches poll for two weeks, then the BCS standings for the past three weeks) has been either knocked off or hurdled.

Unfortunately - or fortunately? - for local fans, none of those top-ranked teams were named Pitt, Penn State, or West Virginia. However, two of the teams had good weekends, while the third helped push the Big East even further down the conference strength list.

On Friday night, West Virginia dropped a heartbreaker to Connecticut in overtime. Seven West Virginia fumbles (four lost) helped the Huskies stay in the game and eventually win on Dave Teggert's third field goal of the game. West Virginia moved to 5-3 overall and 1-2 in the Big East.

Facing Louisville for their 2010 Homecoming, Pitt clung to a 6-3 lead at halftime before putting up two second half scores, one in each quarter, to cruise to victory. The Panther defense held the nation's fourth-leading rusher, Bilal Powell, to 64 yards, though a second half knee injury to Powell didn't help. The Panthers moved to 5-3 overall and 3-0 in the Big East.

Penn State played its best game this season, scoring early and often en route to a 41-31 victory over Michigan. Former walk on Matt McGloin managed a superb game and Evan Royster became the all-time leading rusher at Penn State on the back of a 150-yard, two-touchdown night. Penn State is now 5-3 overall and 2-2 in the Big Ten.

Penn State remains out of the "Receiving Votes" category despite taking down a Michigan team that still, shockingly, is receiving votes. Pitt and West Virginia both received one vote in the Harris Poll, but none of the teams appear in the USA Today or BCS standings.

The computers bumped Penn State up nearly 20 points, while Pitt dropped two points and West Virginia fell 15 points. Jeff Sagarin is the harshest computer for all three teams, mainly because his BCS formula puts emphasis on winning, and three-loss teams are not going to be highly rated in this format.

For the second week in a row, the Big East is without a BCS conference representative. Syracuse is the only team in the top 30 of the human polls, a sure sign that the conference is in trouble. Conversely, the Big Ten has four teams in the top 16 of the BCS (along with 2011 Big Ten member Nebraska). Three more appear in the "Receiving Votes" category of the USA Today poll. 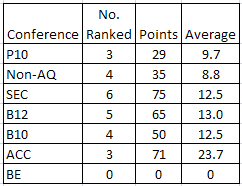