BCS Rankings: Penn State Remains Tops In Region, But Not By Much

The weekly look at the BCS standings and local power rankings finds Penn State on top again, but the lead is slipping.

Share All sharing options for: BCS Rankings: Penn State Remains Tops In Region, But Not By Much

For the first time in BCS history, the Top Ten teams did not move from their rankings last week. Seriously. Boise State jumped TCU in both human polls, but barring a meltdown in Eugene or eastern Alabama, the BCS title game will feature the Oregon Ducks and the Auburn Tigers (Cam Newton's eligibility notwithstanding).

Similarly, nothing changed in the SBN Pittsburgh local power rankings. Despite a 38-14 loss to Ohio State, Penn State remains on top. A West Virginia win coupled with another disappointing Pitt loss shakes up both our local rankings and the Big East title race.

As expected, no local team is in the BCS rankings, though the appearance of both Penn State and West Virginia in the "Receiving Votes" category of the Harris Poll is somewhat surprising. Penn State only fell 2.5 points in the computers, while Pitt's loss to UConn cost them 11 spots with the computers. West Virginia's win helped them move the most, jumping 15.75 points from last week's rankings.

The conference power rankings became muddied a bit, with the SEC dropping a team from last week and the Big 12 gaining a ranked team. Unfortunately for the Big East, they are once again without a BCS ranked team. Mathematically, there is a possibility of a 7-5 Big East champion playing in a BCS bowl. Add in the possibility of an undefeated Boise State or TCU not making the BCS Championship Game, and a college football playoff may be gaining more and more support. 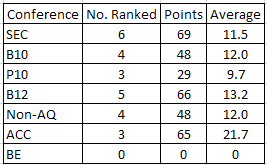