Penn State remains the best in the region, but the second and third spots are up for grabs this Friday in the Backyard Brawl.

The top of the BCS standings remained the same after Week 12 in college football, with the Oregon v. Auburn showdown for the national championship getting ever closer to reality. Unfortunately for each team, they still have to get through very tough in-state matchups over the next two weekends, with Auburn facing a tough Alabama team in the Iron Bowl this weekend and Oregon taking on Oregon State in the Civil War game on Dec. 4.

Locally, all three teams won over the weekend; West Virginia and Pitt each won by a score of 17-10, beating Louisville and South Florida, respectively. Penn State took care of Indiana 41-24 at FedEx Field in Maryland. Speaking from experience, I can personally say that FedEx Field is one of the worst stadiums to try to get in and out of, but the weather was great and watching a Penn State victory from 13 rows off the field is a pretty nice way to spend a Saturday.

Pitt's victory helped the Panthers stay on top in the Big East title race, with the all-important Backyard Brawl quickly approaching. West Virginia's victory kept the Mountaineers within a game of Pitt, but once again, no Big East team is ranked in the BCS.

Penn State is lurking outside the BCS rankings, and a season-ending home win against 10th-ranked Michigan State on Saturday should thrust the Nittany Lions into the BCS standings for the final week of the season. Three Big Ten teams (Wisconsin, Ohio State, and Michigan State) are in the Top Ten of the BCS, with Iowa also making the Top 25.

The SEC remains the top conference in college football, with the Big Ten and Big Twelve not far behind. The Big East remains a distant sixth in the automatic qualifying conference ranks. 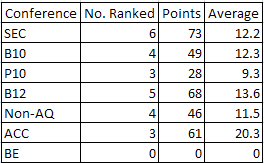