Penn State increases its lead over Pitt and WVU in the local power rankings.

Share All sharing options for: BCS Rankings: Penn State Gets Closer To Top 25

Another week of college football is in the books, and another top five team has gone down. Fifth-ranked Utah lost at home to a very impressive TCU team, one that leads the country in both scoring and total defense. TCU remains in third place behind Oregon and Auburn in the BCS rankings, while Boise State and LSU round out the top five. The end of season chaos is beginning to take shape.

The only local team in action this weekend, Penn State strengthened its position as the best team in the region with a stunning 35-21 victory over Northwestern. The game was a tale of two halves (well, the first 29 minutes of the first half and the last minute of the first half plus the second half). Northwestern dominated the first half right up until the last minute, when Matt McGloin led a Brett Favre-esque nine-play, 91-yard scoring drive to take momentum into halftime. The second half picked up right where the first left off, with Penn State scoring on four consecutive drives to give Joe Paterno his 400th career win. More importantly, it gave the Lions some much-needed momentum going into Ohio State week.

Penn State jumped four points with the computers and is now in the "Receiving Votes" category of both polls. An upset victory at Ohio State next weekend would assuredly bump them into the BCS rankings. Pitt and West Virginia remained relatively stagnant during their bye weeks, each moving up just slightly from last week's numbers.

The Big Ten has four teams ranked in the top 13 of the BCS (in addition to 2011 Big Ten member Nebraska). The Big East, on the other hand, has no BCS-ranked members, while Pitt is the only team that is "Receiving Votes" in the USA Today poll. 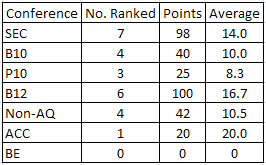