The 2012 Penn State recruiting season has taken a 180-degree turn from its 2011 counterpart. While there are no verbal commitments as of yet, the staff is making an early push for many of the country's best players.

Share All sharing options for: Penn State Must Attack In 2012 Recruiting Season

The 2011 recruiting season officially came to an end just two weeks ago, but the 2012 season is already turning out to be a complete reversal for Penn State, at least in terms of their plan of attack.

Last season, the staff took their time in sending out offers, bungled the communication with other prospects, and slow-played many of their targets until they eventually signed elsewhere. While Penn State does not yet have a 2012 verbal commitment (per new regulations, written offers cannot go out until Aug. 1 of a prospect's senior year in high school), they are certainly changing their game from a year ago.

As of Tuesday morning, the Penn State staff has verbally offered 22 scholarships to top-talent prospects. Unlike last year where the targets held offers from the Toledos and central Michigans of the country, Penn State is currently targeting kids with offers from Alabama, Ohio State, Virginia Tech and Florida, among many others. To be sure, Penn State will lose some of those battles. But to be the best, you must compete with the best, and this is a good start in 2012. Consider the following offer matrix (all offers as reported by 247Sports.com): 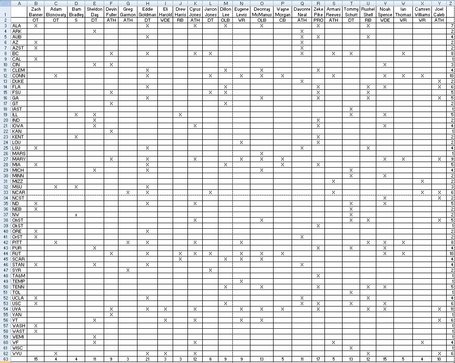 In addition to picking fights against Alabama, Florida, and Notre Dame, Penn State is targeting the top players both in Pennsylvania and in the northeast, two areas PSU must lock down if it wants to stay competitive. Add in the fact that Pitt has a new "speed offense"-based head coach, and ensuring that players like Noah Spence and Rushel Shell end up in blue and white will be very difficult.

Sean Fitz of Lions247 has a list of players to whom Penn State has extended offers. The Nittany Lions are clearly targeting positions of need. The list shows an emphasis on defensive tackle, secondary, and the always-necessary offensive line positions. The players being targeted for the skill positions will be the highlights of the class (the Nittany Lions will probably take one or two quarterbacks and two or three running backs in this class), but keep an eye on all of the linemen, many of whom rank at or near the top in their state rankings.

While the 2011 class started out as a class to forget, and only with a strong ending became modestly respectable, the 2012 class could be a special one. Lion fans just need to keep hope alive and trust that Tom Bradley, Larry Johnson, and the other staff members can bring in a class that looks more like the 2010 class than the 2011 one.

UPDATE: This article was published at 3:30 p.m. on Tuesday. In the mere 17 hours since then, the Penn State staff has verbally offered at least five more players. It seems as though the 2012 Penn State recruiting class is going to be a wild ride. Stay tuned.