If Indiana is going to make a run in the NCAA Tournament, it's going to have to do it without guard Verdell Jones III.

The Associated Press reports the 6-foot-5, 195-pound tore his anterior cruciate ligament (ACL) in a Big Ten Tournament game against Penn State at Bankers Life Fieldhouse in Indianapolis on Thursday and that the injury will cost him the rest of the season. Jones was running on a fast break and crumpled to the hardwood after stopping to pass the ball off to a teammate.

Jones' production for the Hoosiers slipped 12.5 points per game last season to 7.5 points per game this season, but he remained an important part of coach Tom Crean's rotation, seeing an average of 24.5 minutes per game. His team will no doubt miss him as it prepares for its first NCAA Tournament appearance since 2008.

Below is a photo of Jones on crutches before Indiana's quarterfinal game against Wisconsin on Friday afternoon via the Big Ten Network's Brent Yarina. 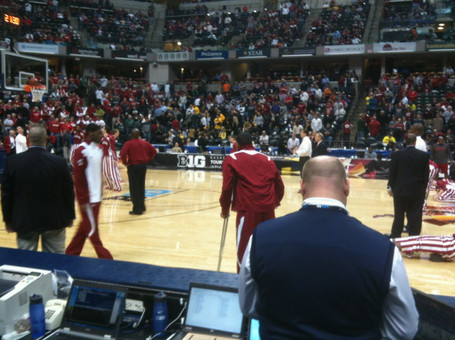 For the latest on the Big Ten Tournament, be sure to stay tuned to SB Nation Pittsburgh and check out BT Powerhouse, SB Nation's Big Ten basketball blog.