The Nittany Lions got a golden goal in overtime to top the Seminoles, 2-1. 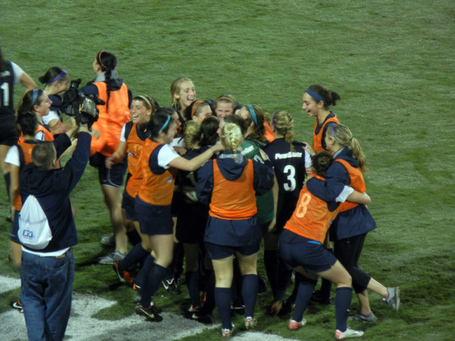 The Penn State women's soccer team is moving on to the national championship game. The Nittany Lions beat Florida State, 2-1, in overtime on Friday night at San Diego's Torero Stadium after midfielder Christine Nairn scored a golden goal a little more than a minute into the extra session.

Penn State got on the board first with a goal by forward Maya Hayes in the 57th minute and maintained a lead until the final minute of play. Florida State's Tiffany McCarty was able to find the back of the net in the 90th minute, though, which sent the game to overtime.

In the extra session, Nairn got ahead on a rush and deflected the ball into the right corner of the net for a goal that sends Penn State's to the first national title game in program history where it will play the winner of the Standford-North Carolina game.

The College Cup championship game will be played on Sunday at 1 p.m. in San Diego and can be seen on ESPNU.