A glimpse at the differences between two sports towns and a report from a Penguins game in a land far, far away.

Share All sharing options for: A Penguins Fan Visits Anaheim

A cheer pours from the marble-laden halls of the Honda Center in Anaheim, California, mere moments after the opening faceoff in a game between the Anaheim Ducks and Pittsburgh Penguins. A quick goal? No, a fight between Ducks heavyweight George Parros and the Penguins' Deryk Engelland, an emerging fighter in his own right.

The winner? I couldn't tell you. Hockeyfights.com can give you a breakdown, but I didn't see a thing, having just taken my place in line outside of the arena, a bit behind schedule. The sea of humanity around me included many in black, a few in white, and an oddball or two in light blue. There were several Sidney Crosbys, Evgeni Malkins, and Mario Lemieuxs inching towards the arena, coupled with some slightly more obscure Maxime Talbots, Jordan Staals, and an odd Peter Taglianetti thrown in for good measure.

Basically, a lot of Penguins fans. Not a majority of the crowd, but close to it.

Such is hockey in Southern California, a foreign game to a region ambivalent to spectator sports, at least in comparison to the Steel City. Where the engine that drives Pittsburgh runs on fuel provided by the Steelers, Penguins, and Pirates, Southern California works in a different fashion.

I've heard many theories as to why this is. Perhaps it is the transient nature of the region, with a large population of non-California natives, all carrying their home allegiances with them. Perhaps it is the weather, which encourages partaking in physical activity rather than watching others do so.

Whatever the reason may be, Ducks and Los Angeles Kings partisans have to deal with imposing numbers of away fans on a nightly basis. It shows. The general animosity found between opposing fans in more sports-centric regions is harder to find in Southern California and, from my limited personal experience, the atmosphere at most games is rarely tense. The setting almost mimics the somewhat awkward appearance of the fans in attendance: flip flops, shorts, and sunglasses oddly matched up with a hockey jersey and a beer, generally not a Molson.

Where do the Penguins rank in terms of fan turnout at Ducks games? "Below Red Wings fans and probably a little bit less than the Kings bring," an elderly usher advised me. The Canadian teams, he told me, generally outdrew the American teams.

Now, the box score for the Ducks 3-2 victory over the Penguins last Friday tells me that attendance was 17,174, the same as the Honda Center's hockey capacity. A sellout? Amazing.

Minor problem with the numbers? This is what I saw: 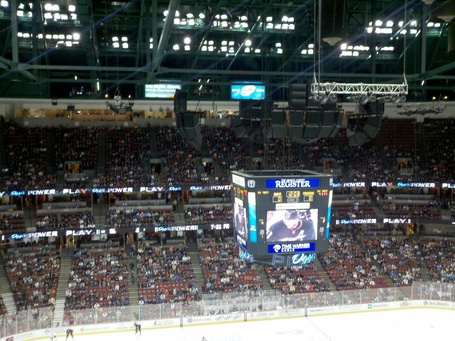 Welcome to the wonderful world of attendance inflation, where franchises do their best to deceive the fans and sponsors into believing that their arenas are filled with rabid hockeyphiles. Of course, the NHL is the biggest proponent of this practice, which makes their product look more popular and dynamic.

But the reach of the Kings' fanbase is significantly larger, owning much of San Diego as well. By and large, most Ducks fans I have run into pledged their allegiance to the fledgling franchise as a reason to get into hockey or to lend their support to a team they can grow with. The Kings, like many of the teams who visit Anaheim, can rely on history and heredity to pad their numbers. Still, even with their history, their higher number of fans, memories, and Waynes, the Kings run into similar issues with fan ratios on a nightly basis.

What makes Anaheim a unique and worthwhile hockey destination is that it can act as a conduit or, better yet, a mecca for hockey fans on the West Coast, a home for the displaced fan and the Ducks fan alike. Sure, a game in Toronto, Montreal or even Pittsburgh, where the fans live and die with each night's result, feels more urgent.

But in Anaheim, most of the displaced away fans are just happy to be in the presence of their hometown team. Mix that up with the typically good-natured Ducks fans and you have a recipe for a unique atmosphere. On the whole, Ducks' fans and employees alike were hospitable, amenities were ample, and the weather was mild and comfortable while the Pittsburgh fans were festive and passionate.

The final result wasn't as pleasing as the surroundings, with the Penguins dropping a hard-fought 3-2 decision to the Ducks, a game that seemed to be there for the taking. But with everything else going right on the night, it was to hard for a Penguins fan to be disappointed after their yearly sojourn to "The Pond."