The Pittsburgh Penguins invited bloggers to a game for the first time this Saturday. SB Nation Pittsburgh made the trip. Here's where this could be heading and some information on how NHL teams throughout the league are handling blogger access.

The way the NHL and its teams have handled granting access to bloggers has been a minor point of contention this offseason. Teams have many different stances and opinions; some, like the Atlanta Thrashers and New York Islanders, have been very open and receptive to offering media credentials to bloggers.  Other teams, like the New York Rangers, are strongly against giving access to online media. In Edmonton, a blogger made unprofessional comments while in the press box and the team and got his pass revoked.

Puck Daddy's Greg Wyshynski has a unique take on this.  He's the editor of Yahoo's Puck Daddy blog, is a member of the Professional Hockey Writers Association and has been named one of the most influential people in hockey.  Over the summer the league had a conference call to hash out a policy that would appease the teams that did not want their players subject to access from bloggers.

Monday's conference call didn't produce a concrete policy, nor are the NHL's 30 teams expected to agree on one for this season. But it revealed strong support from powerful franchises to restrict blogger access to their players and coaches --even if those bloggers are recognized as working media by another team

New media has helped change the way fans consume NHL news, views and information. But it's clear that some teams are ignorant of the maturation of the alt- media -- don't they know it's the new golden age?! -- and have no interest in engaging those bloggers and their audiences to influence their coverage with an open-door policy. Because it's much easier, and perhaps satisfying, to slam it shut.

Which is why one Western Conference team, during this week's call, said no bloggers are getting in their building "without a ticket."

Given some of these harsh stances, I found it encouraging that the Pittsburgh Penguins have reached out to bloggers.  What's the Penguins' policy?  Well, right now it's a solid "we'll see."  Along with Jesse Marshall from Faceoff Factor and Don Spagnolo from Mondesi's House, I had the privilege to be in attendance for Saturday night's 3-1 win over the Columbus Blue Jackets.  We were the first Penguins bloggers the team has credentialed for a game, so I joked we were like Neil Armstrong. The team was great to us, and they pretty much followed the bullet points from this leaked NHL memo; we were placed at the end of press row and given a different color credential than other media members. For this first foray we were not invited to press conferences or given access to locker rooms but still treated in a professional manner.

Some bloggers would definitely complain about this limited access, but I don't think that's the right path. Tom McMillan, the Pens' VP of Communications  -- and a guy whose name is on Lord Stanley, directly above someone named Sidney Crosby -- spent the entire second intermission chatting with us. Other Pens employees were very helpful and, most importantly, were open with us. Most of the NHL teams that allow the most blogger coverage are in markets where they need it because mainstream media (TV, newspaper, radio) focus on other stories or sports.  It's different for a team like the Penguins that gets solid media coverage and has a buzz to be on the progressive side of this issue. 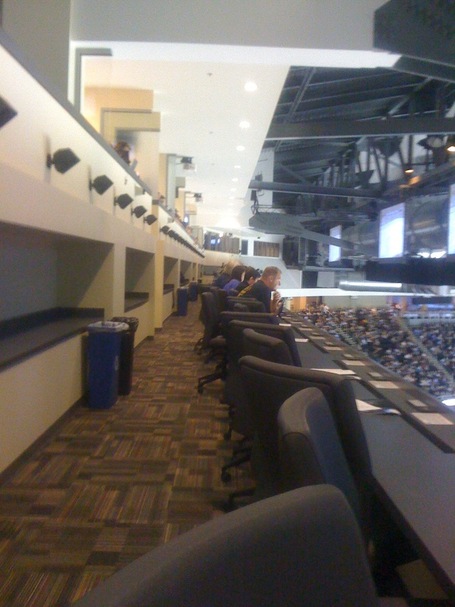 I am proud to say the blogger crew conducted itself well - we were professional and courteous. All the players who weren't playing were just a few seats away and we hardly paid them any mind. This can be pretty difficult when you have Max Talbot whooping and hollering during his buddy Kris Letang's fights. Or if you find yourself sharing a cramped elevator with none other than General Manager Ray Shero. Despite a few of those "wow, we're really here" moments, it went well and all sides had a positive experience for night one. There have already been discussions and early talk about having bloggers back in the press box for future regular-season games.

The Penguins admit they don't quite know what the end result of all this will be. Unlike some other teams, they have not formulated an official policy, and they're hesitant to paint all online media with one brush. I do know they seem serious in their interest about supporting and helping the major Penguins blogs who cover them, which is a positive step for a team in their position. The night was a success and every inch and feature of the new Consol Energy Center is top-notch.  Every employee is so excited to be in the new facility with all these amazing capabilities that it becomes contagious. Hopefully the blogging presence on press row will be there too.