If October was any indication, Matt Cooke has changed his ways ... and for the better.

Matt Cooke is a changed man, or he's trying to be at least. We were led to believe this, because we were told, ad nauseum, since the end of last season.

We were told by members of the media, the team and Cooke himself. Many took him at his word, or simply showed approval because he was a Penguin and 'true' fans blindly support the team through thick and thin, no questions asked.

Others, likely a strong majority, including myself, looked upon Cooke's avowed change in tendencies with skepticism. They were empty promises provided in lieu of his typical excuses, and there was little evidence to be found during the Ontario native's career that could inspire belief in his supposedly newly-discovered dedication to ethical play.

But if the first month of the season is any indication, I was wrong, and Cooke has done a very respectable job of cleaning up his game.

As a matter of fact, Cooke just completed the cleanest and most productive October of his career. 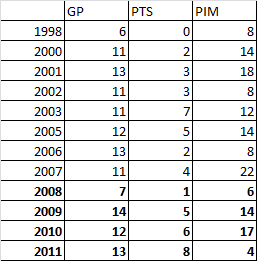 The above graph simply summarizes Cooke's career numbers during the month of October, highlighting how many games he played, points he scored and penalty minutes he accumulated. The years in bold indicate when he became a member of the Penguins and above that, his time with the Vancouver Canucks.

It's not as though the Penguins aren't taking any penalties as a team right now. They've accumulated the 11th-most penalty minutes in the NHL as of Sunday night, a ranking that is sure to drop by the time they take to the ice again on Thursday. Still, it's a fairly steep drop from logging the second-most minutes in the NHL last season, and sixth-most the season before.

Now, there's still a lot of hockey to be played this season, but the numbers provide a glimpse of how different the Penguins' place in the penalty world conceivably is without Cooke's considerable contributions.

Hopefully Cooke takes to heart how good he can be without losing control. He can be very effective even if he tones the hitting down. He can still be a linchpin on the league's top penalty killing unit. And he can be even more prolific offensively if he spends most of the game out of the penalty box.

Historically, Cooke has run into more penalty minutes as the season progressed, rather than at the start.

But reform has to start somewhere, and the beginning of the season is a better place than anywhere else.

This is, perhaps, the most interesting storyline of the season in Pittsburgh. Sidney Crosby's eventual return from the concussion he suffered is imminently more vital, and harrowing. Cooke, on the other hand, is trying to buck a trend, a larger-than-life stereotype he willingly created for himself over the course of his career. The amount of nuance required to analyze this is staggering.

Can a man change who he is, as a person and as a player? Can he morph from exceedingly dirty to surprisingly clean, and still be effective? Will a relapse happen? Will it be accidental?

There's a long way to go, but if the start is any indication, Cooke has shown that there's a very real chance that the words he shared at the last season were sincere, and that he truly is approaching hockey with a completely different outlook, one that allows him to care for himself and the welfare of his opponents.

For that, he deserves credit.