Wilkes-Barre/Scranton Penguins Throw Their Support Behind The Steelers

Share All sharing options for: Wilkes-Barre/Scranton Penguins Throw Their Support Behind The Steelers

Wilkes-Barre may be in the eastern part of Pennsylvania, but members of the top affiliate to the Pittsburgh Penguins are certainly leaving no doubts for who they want to win Super Bowl XLV.  The Wilkes-Barre/Scranton Penguins have fashioned a huge Steelers logo under their ice surface and will have it on display this weekend, in support of their parent team's city's football squad.

Why would they do it?  On twitter the official feed of the team mentioned it's "for fun."  Minor league teams often are willing to take extra steps to grab attention in some of the things that they do, and given how much this is starting to receive, perhaps it's worth it.

What shouldn't be lost in this gesture is just how well the Baby Penguins are doing.  With a record of 36-12-0-0, the team is well ahead of the league in terms of wins and points.  They also continue to supply the NHL with excellent players, such as Mark Letestu and Chris Conner, who have stepped seamlessly into the NHL.

After the jump, the photo of center ice in Wilkes-Barre. 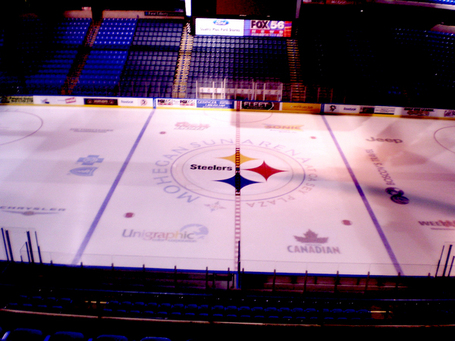