There are several reasons Penguins fans should be concerned about their team heading into Game 6 of their NHL Playoff series against the Tampa Bay Lightning on Monday. Saturday's 8-2 loss shouldn't be one.

The Penguins' inept power play, faltering penalty kill and inability to put shots on target from prime scoring positions are all areas worth worrying about.

But not Saturday's blowout.

Just ask Max Talbot who, for one, isn't particularly worried about the Penguins' loss on Saturday:

Talbot is, of course, referring to the Penguins rattling off two straight wins in 2009 to win the Stanley Cup after suffering a humiliating 5-0 defeat against Detroit.

If the Penguins' reaction to that single game is all Talbot could base his confidence on, he'd be prescribing himself a placebo. But, if recent history shows us anything, it is that the Penguins are masters of bouncing back after a heavy losses in the playoffs.

The stats don't lie. Since 2007, the Penguins have only lost once in the game immediately following a non-series-deciding playoff loss of three or more goals: 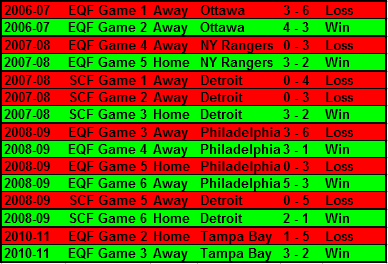 The Penguins don't come out and dominate or anything like that. Five of the seven wins were by a goal. The other two, both two-goal victories, had the insurance goal come by way of an empty net. But the scores are immediately tighter.

For a player who has had to answer questions about his ability to rise to the occasion throughout his career, Fleury has been adept at stopping the bleeding when the Penguins need him most. During these rebound games, Fleury's save percentage rises to.932 from .864. His goals against average similarly dips to 2.25.

And all of this while the Penguins, surprisingly, gave up more shots in the winning contests.

Simply, he's been a rock.

Another reason to be optimistic? The Penguins have gone 5-1 in series deciding games on the road since Dan Bylsma took over as head coach. Road success and a short memory. Sounds like the recipe for a win, right?

All of this looks past the fact that the Penguins just surrendered eight goals on home ice. Not fluky goals, mind you. These were goals off of uncleared rebounds, missed defensive assignments and massive passing lanes for the Lightning to exploit. The Penguins were flat-out bad.

But history again reminds us that they have been down this road before and are usually up to the challenge. Much like Talbot, Chris Kunitz is well aware of the history:

"The longer you're around, the more you know you can't change yesterday," Kunitz said. "You've got to go out and prove yourself the next day. It takes a little bit of leadership, letting the guys who weren't here know it is possible."

Getting everybody on the same page. That's the sum of it. The secret to the Penguins' success at rebounding.

Well, that and great goaltending.

If the Penguins are to close out the series Monday, they're going to need a bit of both.