Looking to go on a baseball trip? Cincinnati's Great American Ball Park would be a great destination.

As fans across Major League Baseball have learned over the past 10 years, baseball stadiums don't get much better than Pittsburgh's PNC Park. The same waters that flow past its outfield gates, however, lead to another gem of the Midwest down the Ohio River, Cincinnati's Great American Ball Park.

I saw the Reds host the Pirates for a two-game set on May 18-19. As college students with some time to kill in the early summer, a friend and I decided to hop in the car for a quick five-hour drive across Ohio and were lucky enough to catch two Pirate victories. Charlie Morton pitched a complete-game shutout in the the Bucs' 5-0 win in game one, and James McDonald battled through some first inning troubles in game two to key a 5-3 Pittsburgh victory in game two.

It was a fun trip, and we learned quickly what a great experience GABP has to offer. Here's a look back at our visit and what you can expect if you decide to visit the Queen City to catch the Reds.

Parking. Driving through the city, we found parking for as cheap as $7, but being unfamiliar with downtown Cincinnati, we decided to try and get as close to the stadium as we could for a reasonable sum. We found $12 parking down near the river, next to the stadium, and thought that was pretty fair. The area where Cinergy Field used to be has been built up a lot in recent years, much like Pittsburgh's North Shore, so there's less parking available than there once was, but it was more than convenient for us out-of-towners. Grade: B

Tickets. Used to the dirt cheap ticket prices at PNC Park, we expected we'd have to pay more than we usually do to get into the ballpark. We were pleasantly surprised, however, when we were able to purchase tickets for just $5 at the window minutes before first pitch. Some of the premium seats are more expensive than back in Pittsburgh, but that's to be expected at the home of a defending division champion. Generally, though, there are plenty of price ranges to fit your budget if you're ever in town to check out the ballpark. Grade: A

Food. I can't really speak to how good or bad the food is at GABP because I didn't want to pay for it. I don't think I've seen higher concession prices in my life. A bottle of water and bag of popcorn alone would have run me $10. That said, if you've got that kind of dough to blow, the selection looked pretty good. A market-style stand behind home plate offers everything from apples to beer and, of course, there are plenty of places to pick up all your ballpark favorites. The ice cream also looked really good. Grade: C

Ballpark Staff. I can't say enough about these good people. From the woman who waited on us at the ticket window, to the staff inside the team store, to the ushers in the seats, these folks were winners all around. They were friendly, and genuinely invested in making sure we had a nice visit. Some even tried to strike up a conversation, which we really appreciated. They could have been showing me around the city dump and I probably would have walked away smiling. Grade: A+

Views. We gave ourselves time to walk around the ballpark and it didn't feel like there was a bad view in the place. The seats down low get you close to the game, especially in right field, where it almost feels like you're standing next to the right fielder. Up high, some seats are reminiscent of "Peanut Heaven" at Three Rivers Stadium, but as riverboats navigate the Ohio River beyond the outfield wall (with Covington, Kentucky across the river as a backdrop), you really get a feel for the region as you take in the action on the field. Grade: A

Seat Upgrades. As I noted earlier, we paid $5 for our seats, a pretty good deal. It was an even better deal when an usher on the third base line beckoned us over and asked us where our seats were. We told him, and he asked us if we'd like to sit lower. I held out a $20 and his eyes lit up. He led us to a section right above the Pittsburgh dugout and throughout pre-game, kept trying to get us as close to the field as he could. We ended up watching batting practice from the second row, shockingly. Eventually, some folks took those seats and we had to move back a little bit, but for $15, we got to watch all of game one with some of the best seats in the house, and without fear of getting kicked out of the section. It was great. Grade: A

Reds Fans. I think we heard these folks boo once between the two games, and it was on an admittedly-questionable call. They supported their team, despite the fact it trailed for much of the series, which was impressive, and they especially appreciated defending National League MVP Joey Votto, who got loud cheers in every at-bat. I don't think I've ever seen a baseball player more adored by his home fans than this guy. The folks we interacted with were friendly, and asked us a lot of questions about our stay. They also gave us some tips for enjoying the town, and if we'd had more time, we would have had no shortage of things to do thanks to the words of our de facto tour guides. Grade: A

Overall. I'd highly recommend GABP to anyone looking to make a baseball pilgrimage. I've been lucky enough to attend games at several stadiums across the Majors, and Great American comes in right at the top of the list. The best part is that was a pretty inexpensive trip traveling from Pittsburgh. My buddy and I each managed to escape the whole deal with less than $100 damage to our respective bank accounts, gas included. If you ever get a chance, definitely check out this Ohio treasure. Grade: A- 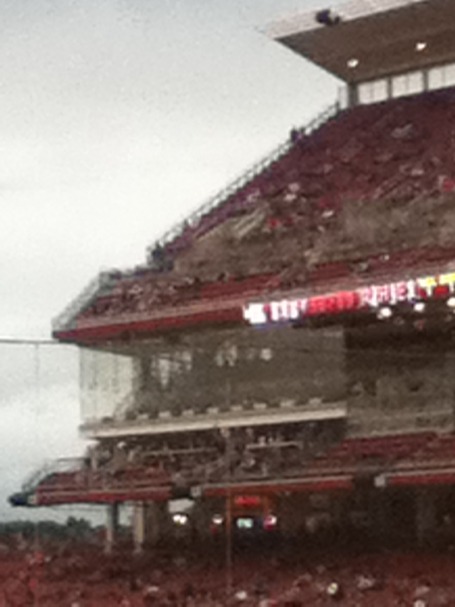 The seats we were supposed to have for game one. 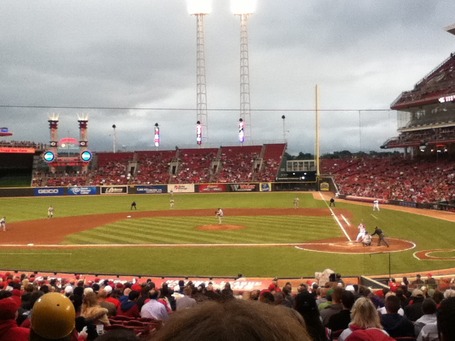 The seats we ended up with for game one. 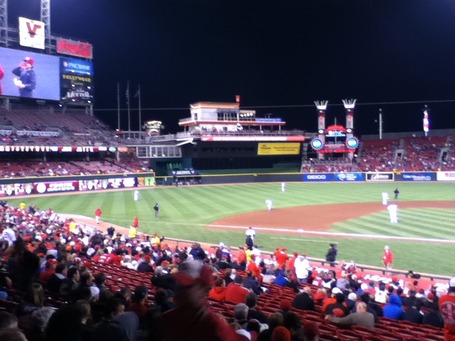 Our game one seats at night. 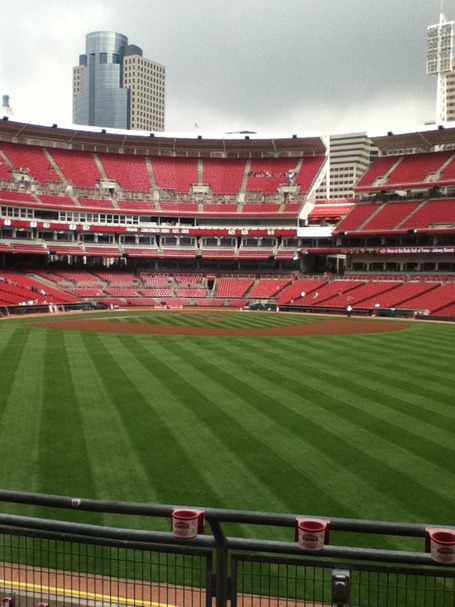 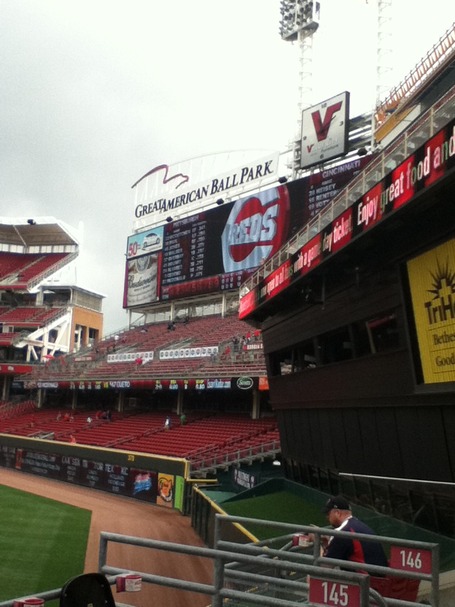 Up-close view of the scoreboard in left. 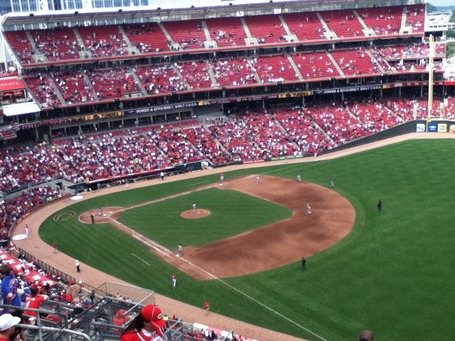 View from our game two seats.