Even at nearly 20 years of age, Progressive Field in Cleveland is still a great park.

Today, swanky stadiums with all the modern comforts and amenities are the norm across Major League Baseball. With few exceptions, trips to Big League ballparks around the country will take you to a venue built in the last 20 years with a "retro" look. "Cookie cutters" like Pittsburgh's Three Rivers Stadium, Cincinnati's Riverfront Stadium and St. Louis' Busch Stadium have been replaced by more classic-looking spots like PNC Park, Great American Ball Park and New Busch Stadium.

Cleveland's Progressive Field is one reason for that.

Opened in 1994 to replace Cleveland Municipal Stadium as the home of the Indians, Progressive Field, along with Oriole Park at Camden Yards in Baltimore, was one of baseball's first modern stadiums built with a classic appearance. Its debut influenced the wave of new stadium construction just petering out today and can be considered an ancestor of modern baseball parks.

This past weekend, I took in the Pirates' Friday and Saturday games at the ballpark. Here's a look back at the trip.

Parking: There's an entity called "USA Parking" that owns many of the open lots around Progressive and the adjacent Quicken Loans Arena. It charges an outrageous $20 almost across the board, so avoid those lots at all costs. We were able to find $10 parking a little further into town, near the Huntington Bank building. It was a bit more of a walk, but no farther than the walk from the trolley to PNC Park in Pittsburgh. If you'd rather not get gouged, I'd advise avoiding the area directly around the ballpark. Grade: C

Tickets: On Friday night, we spent $8 for upper-deck tickets and sat above the outfield. On Saturday, we sat lower on the upper deck, this time on the third base line, and paid $16. Both were reasonable deals, and a quick scan of the full price range shows the Indians, like most small-market teams, can easily offer tickets to fit any budget. Grade: A

Food: Friday was dollar dog night, and my dad cashed in on that promotion. Of course, he missed most of the game waiting in line for the dollar dogs, but he was able to get four hot dogs and a drink for less than $10, which is a great deal no matter where you are in the big leagues. Saturday, it was back to reality, as the standard price for a hot dog is $4.25 at Progressive, a little high for our tastes, so we didn't eat at the ballpark. Generally, the food looked good. The beer selection was the most diverse I've ever seen at a big-league park, so if you're into that, Progressive might be the place for you. Grade: B+

Ballpark Staff: On Friday night, the big ticket lines moved quickly, which was very much appreciated, since we were late. At a number of ballparks I've been to, including PNC Park, ticket lines can be a big problem, but the Indians had their act together and got us in the ballpark quickly. The usher presence was there, but not nearly the police state it is at PNC Park, and workers were generally friendly. High marks for these folks. Grade: A

Indians Fans: Despite this series' billing as a "rivalry" fans of both teams appeared to get along pretty well. There were the occasional "Pittsburgh [stinks]" chants directed our way, but it was all friendly and good-natured. The atmosphere was great. Everyone felt locked into the game and the crowd was loud when the Indians scored. All in all, the Indians fans we encountered were good ones. Grade: A

Views: Friday night, we sat high in center field. It wasn't a particularly good view, and I probably wouldn't sit there again for a while if I had the option, but there's no question it's a unique one in major league baseball today. Few stadiums have upper decks that stretch into center field these days, so if you're looking for something unique, I recommend sitting in the seats at least once. Saturday, our seats were one the first-base line and the view was about what you'd expect: high above the field, but unobstructed and in full view of the Cleveland skyline. I liked what I saw. Grade: A

Fun Side Trips: When talking about Cleveland, you'd expect this space to be dedicated to the Rock and Roll Hall of Fame. Not so fast, my friends. Our little Cleveland side trip Saturday took us to the house from "A Christmas Story." on West 11th Street. It was recently restored by a man from California, and is now open to tours. There's also a museum and gift shop across the street. As a big fan of the movie, I geeked out a little. A very cool alternative to the cliche Cleveland tourist attractions. Grade: A

Overall: The trip probably would have been a little more enjoyable with a couple of Pirate wins, but the ballpark experience itself lived up to its billing of being among the best in baseball. If you remove the parking fiasco and evaluate the park simply in terms of things under the Indians' control, it was about everything you could have asked for. Almost 20 years into its existence, Progressive Field offers hope these new gems of baseball will be around a long time. Grade: A 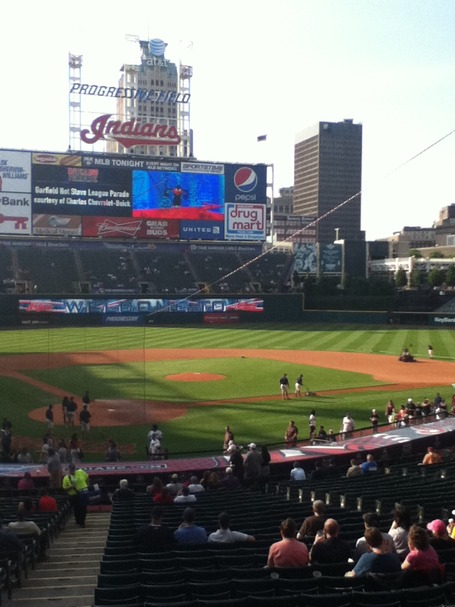 View from behind home plate on the lower level. 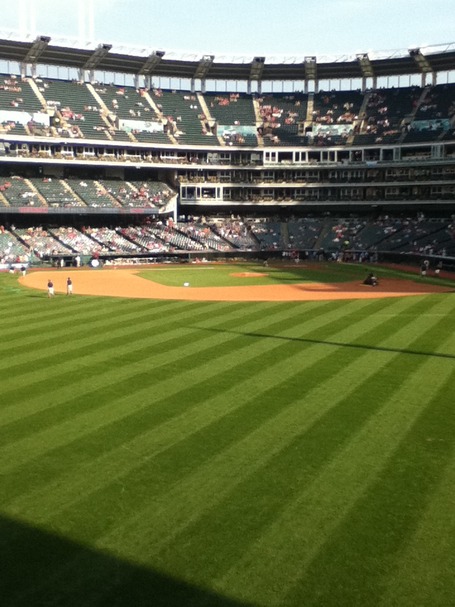 View from the right-field bleachers. 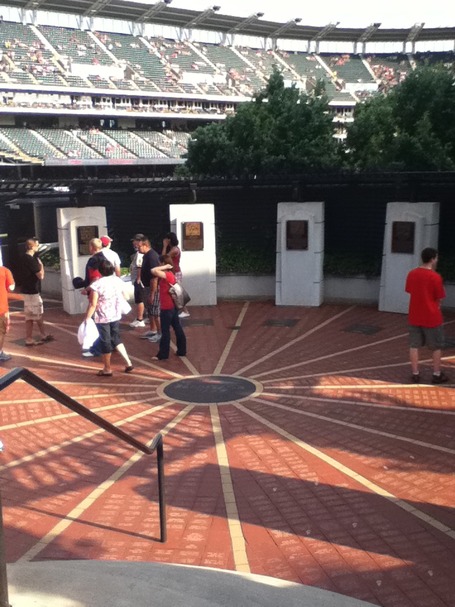 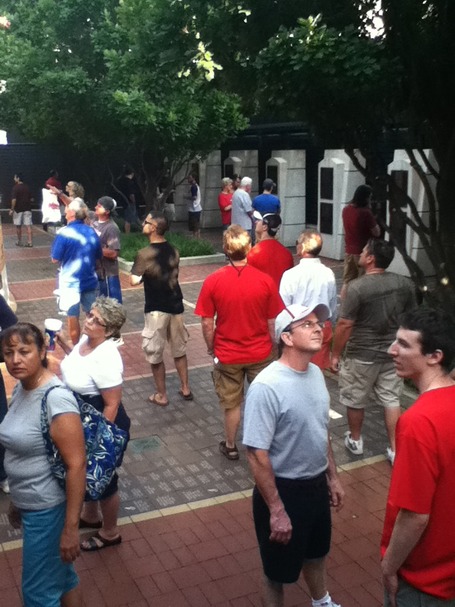 Lower level of the memorial park beyond center field. 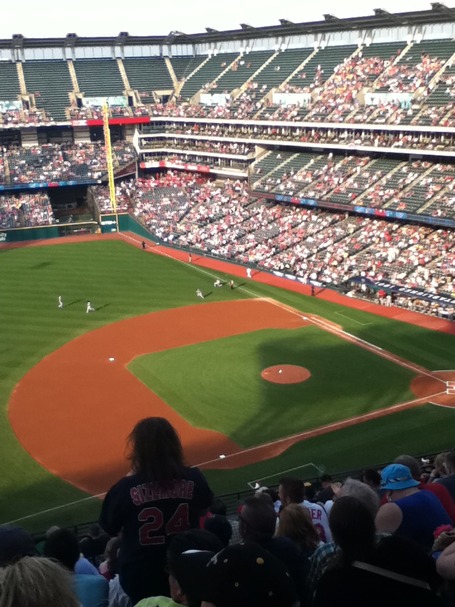 View from the upper deck on the third base line. 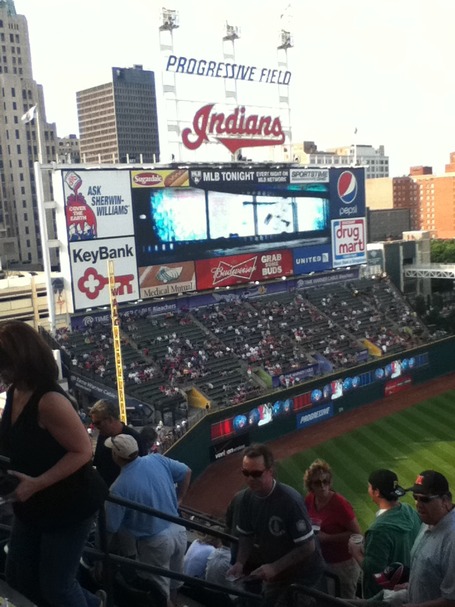 View of the scoreboard from the upper deck. 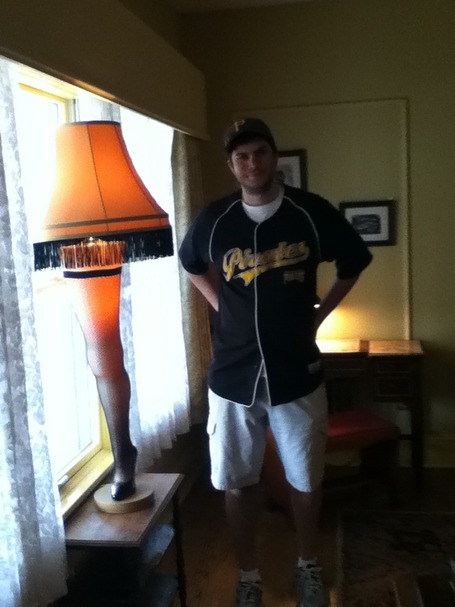 Yours truly with the "Special Award" inside the house from "A Christmas Story." 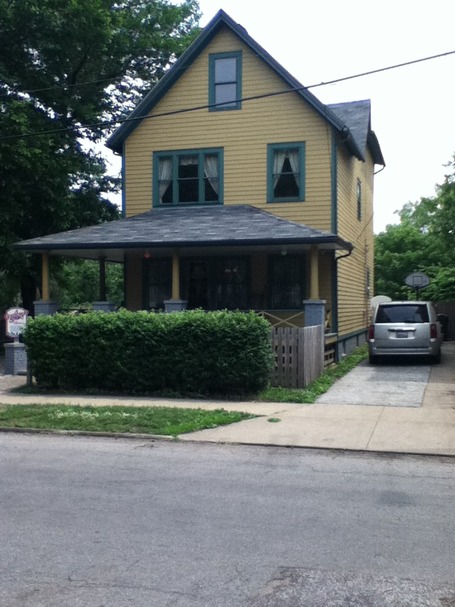 The house from "A Christmas Story."