Big Night For Current And Former Pirates On Field...And Twitter

Wednesday night, Andrew McCutchen got the Pirates to .500 by whacking a solo home run in the bottom of the 12th inning against the Diamondbacks, giving Pittsburgh a 3-2 walkoff win. In Milwaukee, McCutchen's former outfield mate and ex-Bucco Nyjer Morgan, also known as "Tony Plush," cracked a double in the bottom of the ninth inning to send the Brewers home 7-6 winners.

Their big night on the field led to an interesting moment on Twitter as McCutchen, Morgan and the latter's alias became trending topics in the United States at the same time. 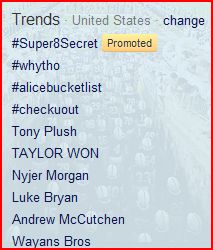 Big deal in the grand scheme of things? Not really. Fun quirk of the Internet? You bet, especially considering the "Tony Plush" nickname can trace it's genesis to an interview with former "Extra Innings" host Rocco Demaro back in 2009 while Morgan was still with the Pirates. Watching that local meme rise to national prominence, if only for a fleeting moment, is certainly something worthy of being preserved for posterity.