Share All sharing options for: Pirates Vs. Astros: Wandy Rodriguez To Make Pirates Debut On Saturday

Newly-acquired starting pitcher Wandy Rodriguez will make his Pirates debut on Saturday against the Astros in Houston according to MLB.com's Tom Singer. The Pirates traded for the 33-year old righty on Tuesday evening.

Singer ,also reports that Kevin Correia has been bumped from the Bucs rotation to make room for Rodriguez. Correia was the winning pitcher in Pittsburgh's 3-2 victory against the Cubs at PNC Park and is 8-6 with a 4.24 ERA, 50 strikeouts against 30 walks this season.

Rodriguez was 7-9 with a 3.79 ERA and 89 strikeouts against 32 walks with the Astros before joining his new teammates when they arrived in Houston on Thursday. Here's a photo of Rodriguez in his new digs and talking to reporters, courtesy of the team's official Twitter account. 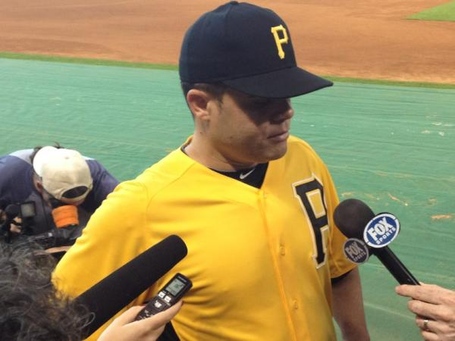