Share All sharing options for: Charlie Batch's Bankruptcy Serves As A Cautionary Tale

Looking over a bankruptcy petition can be incredibly sobering. There, on a few dozen sheets of paper, is a person's personal plea for financial absolution, presented to the court as public knowledge. A once-private life now voluntarily shared with the world in the most involuntary of ways, forced into submission by heavy debt.

Such a step was recently taken by debtor Charles D. Batch, a "seasonal contract employee of the Pittsburgh Steelers, LLC" according to his bankruptcy petition.

Reading Batch's petition can be surreal at times. One must, as part of bankruptcy, itemize all personal assets and debts and present them to the bankruptcy court. The court then analyzes all of the information to determine whether the debtor is eligible for bankruptcy. Because of this, and the public nature of a bankruptcy, we have a bird's eye view of Batch's financial and business life.

There are several "schedules" found on bankruptcy petition, and it is in these schedules that all of the information relevant to the case is listed. Lettered "A" through "J," each schedule found in the petition pertains to a certain facet of the petitioner's case. One of the more interesting groupings is "Schedule B," a listing of personal assets. This is where everything from Batch's bank accounts and automobiles to clothing and guns can be found.

On a typical bankruptcy petition, the personal property section can be sparsely populated, a sign of the individual's haggard financial standing . For wealthier debtors, the listing can become a bit larger. For Batch, who has assets listed worth upwards of  $2.3 million (a low number that appears overly optimistic on the part of his attorneys), the list can be much more interesting, and the petition as a whole considerably more enlightening. 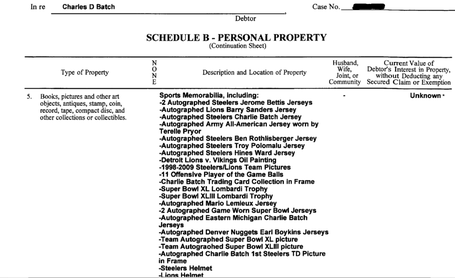 For example, listing No. 5 on "Schedule B" is reserved for things like antiques, rare art, collectibles and other unique items of a similar nature. Though Batch is not much of an art connoisseur, as evidenced by his possession of a "Detroit Lions vs. Minnesota Vikings Oil Painting," he does have a sizable collection of NFL memorabilia.

There, listed amongst his retirement plans and recreational water craft, are autographed football jerseys from his contemporaries, all likely of a monetary value considerably smaller than their sentimental worth to Batch. Signed Jerome Bettis, Terelle Pryor, Ben Roethlisberger and, of course Charlie Batch jerseys are all listed. How about Mario Lemieux? Check. Hines Ward? Check. Batch's fellow Eastern Michigan alum Earl Boykins? Check.

The most depressing item listed, aside from the Lions vs. Vikings painting? The pair of Super Bowl rings Batch won with the Steelers. 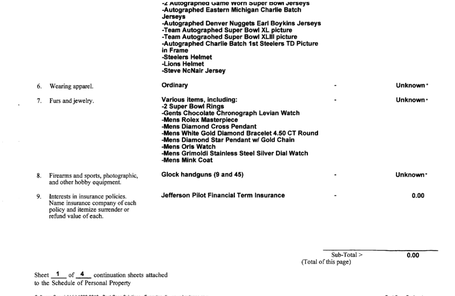 The two most frequently used chapters of the bankruptcy code for individuals are Chapters 7 and 13. A Chapter 7 bankruptcy is a straightforward bankruptcy, as quick and, generally, inexpensive as you will find. In it, most of the filer's debts are wiped out, with a few notable exceptions.

A Chapter 13, on the other hand, is considered more of a "reorganization" of an individual's debts. Essentially, most of the filer's debts will be settled in monthly payments, theoretically made at an affordable, considerably lower rate over a number of years. The debtor isn't losing all of the debt, merely settling it to the best of his or her ability.

Similar to Chapter 13, is a Chapter 11 bankruptcy, which is a much more intricate and nuanced form of bankruptcy designed to deal with individuals or businesses with significant financial assets and debts Much like a Chapter 13, a Chapter 11 focuses on restructuring the business affairs and debts of the individual, creating a payment plan to pay off creditors as well can possibly be done. Because of Batch's wealth, he could qualify for a Chapter 11 instead of a Chapter 13.

But Batch, who lists just under $8.3 million of debt, mostly from failed business ventures, does not want to go into a Chapter 11. He wants to do a Chapter 7.

In order to quality for a Chapter 7, debtors earning above the state's median income level must pass a test that proves they are operating at a financially unsustainable level. Batch, whose current NFL contract pays him over $720,000, clearly doesn't meet the median income criteria, nor do his expenses seem to trump his yearly salary. But, there are ways around this.

The most commonly used workaround, and one that Batch will surely use, applies when a strong majority of a filer's debts are incurred from business losses. Looking over Batch's petition, one can clearly see that most of his debt is business related. The question now becomes, how did Batch lose so much money?

The Reality Of Real Estate

In 2009, Doug Glanville, a retired baseball player who spent parts of eight seasons with the Philadelphia Phillies, Chicago Cubs and Texas Rangers, wrote in some detail about the troubles awaiting professional athletes as they near the twilight of their careers, namely, entering the business world unprepared.

Shortly before I left the game, in 2005, I invested in a real estate development company. (Ask any ballplayer in transition; odds are they have at least "dabbled in real estate." It is the fashionable investment of choice. It is also tangible and real, as you’re able to slap your name on a development sign and have the world know you’ve accomplished something.)

Glanville further postulates that, since most professional athletes went to college mainly to hone their athletic skills, they are not only ill-prepared for the business world, but have missed out on 10-15 years of experience their competitors have already gained. Athletes may have earned a lot of money playing sports, but that just leaves them with even more money to lose in retirement, and a number of dubious investors interested in selling them on a new scheme.

Glanville learned this the hard way, mainly through trouble in the real estate market. Batch, sadly, appears to have had to learn a similar lesson. Take another look at his petition: 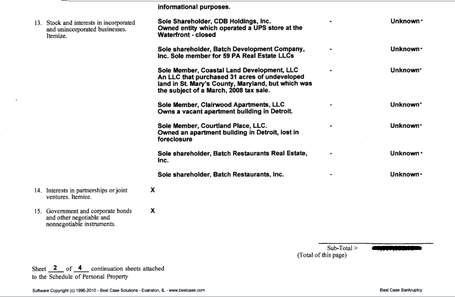 As part of his personal property, Batch has to list businesses in which he has some ownership. Batch lists seven. Of the seven, five have some interest in real estate development. Of those five, only one could potentially be operating successfully. The others either have had property seized from them or their assets are inactive and earning no income.

And there is your recipe for disaster. Owner of seven corporate entities, four of which clearly cost him money while the success of the other three are unclear from the bankruptcy petition.

Now, it's easy to say that Batch made poor investments, and you'd be right in saying that. But ask anyone who's worked in real estate over the last five years and they can tell you that it's no walk in the park. Batch Development Company, Inc, for example, has been around since 2005.

Batch seemingly opened a number of companies right around the same time, according to the Pennsylvania Department of State's website. Batch Development Company, Inc., Batch Property Management, LLC,  Batch Venture Capital, LLC, CDB Holding, Inc. and Batch Development Company, Inc. were all formed in 2005. Some of these companies are not listed on his bankruptcy petition.

Around this time, everyone was getting involved in real estate. Loans were incredibly easy to acquire, regardless of your income, and houses were selling quickly. It was a seller's market and it appears as though Batch was trying to take advantage of that before the end of his NFL career. Things were probably good for some time too, before housing prices began to drop in 2006, a prelude to the subprime mortgage crisis that hit hard in 2007.

A declaration of bankruptcy is not an indictment of an individual's character. If anything, Charlie Batch has shown himself to be a valuable member of the Pittsburgh community. His work with charities, including his own, is well documented and his attempts to revitalize Homestead and other areas around Pittsburgh are commendable.

Batch's petition shows even more evidence of this, with him covering much of his mother's living expenses and providing his brother with financial aid. For all intents and purposes, Batch got into a bloated real estate market at a particularly brutal time and, overestimating his income, built up unmanageable debts. Now, nearing the end of his NFL career with a lockout possibly on the horizon, Batch was left with little choice but to play his trump card: bankruptcy.

One shouldn't look in wonder, mouth agape, when hearing of Batch's difficult financial situation, thinking: "How can someone who makes so much money go bankrupt?"

For a professional athlete playing at the highest level, the natural action is to go for the top. Charlie Batch went for that, attempting to not only build a large real estate empire, but also maintain his NFL career and devote time to charity. Quite the itinerary and one which, unfortunately, was unsustainable.

Batch swung for the fences and missed. In his case, bankruptcy should provide him with another at bat. If he has learned anything from all of this, he'll swing a little more conservatively next time.