NFL Playoffs, Jets Vs. Steelers: Teams Won't Talk Trash, But Their Mayors Will

Share All sharing options for: NFL Playoffs, Jets Vs. Steelers: Teams Won't Talk Trash, But Their Mayors Will

Compared to last week's near constant trash talk between the Jets and the Patriots and the Steelers and the Ravens, the build-up to this weekend's AFC Championship between New York and Pittsburgh has pretty much been a love-fest.

But that hasn't stopped Michael Bloomberg and Luke Ravenstahl, the two cities' mayors, from pandering to the obvious populist appeal of football for political gain publicly smearing the opposition and rooting their teams on. At a recent rally, Ravenstahl predicted a Steelers win, asking the crowd what the Statue of Liberty might look like if she were waving a Terrible Towel. (My opinion: totally awesome.) He also had some words for Bloomberg:

"The Mayor over there seems to be dragging his feet. He knows the Steelers are going to win, that's why ... I'll make a prediction. The Jets won't score an offensive touchdown."

Whoa - that's waaaaay more bold than my prediction for the game! Bloomberg has (of course) predicted a Jets win but failed to reach for the stars like Ravensthal. You'll recall that this is the same guy who hilariously changed his name to "Steelerstahl" for the week leading up to the Steelers' AFC Championship matchup against Baltimore a couple seasons back. This is a politician who knows what Pittsburgh sports fans want - give him that.

All of this is great, but I think my favorite part of the whole story is the not-so-subtle dig at Pittsburgh that the New York Daily News works into its poll: 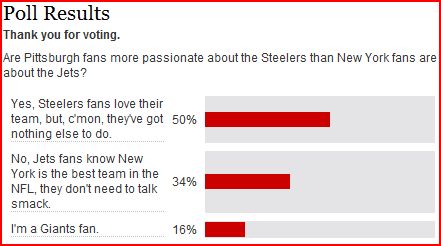 Get it? You see, NYC is an amazing place with tons of awesome things to do besides watch football! Now, I've only been to New York ten or fifteen times, but if you haven't been, this is what a typical weekend looks like, just hanging with Robert Loggia: